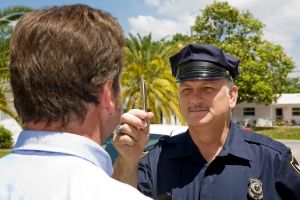 One of the more popular field sobriety tests (FSTs) in the state of California is the horizontal gaze nystagmus (HGN) test. While law enforcement officers in California will use other types of FSTs, the HGN test is considered by law enforcement to be accurate in determining if a person is driving under the influence (DUI). Although law enforcement officers in the San Joaquin Valley administer the HGN test on a regular basis, the results are not always correct and can be based upon a variety of circumstances. In reality, the presence of HGN is only a determination that a person had consumed alcohol and not that a person is under the influence.

Horizontal gaze nystagmus involves involuntary jerking of the eye. This occurs naturally as the eyes of a person gaze to the side. Under normal circumstances, nystagmus will happen when a person's eyes are rotated at high peripheral angles. However, when a person is impaired by alcohol, it is possible that nystagmus can be exaggerated and occur at lesser angles.

A person who is impaired by alcohol will also appear to have difficulty tracking a moving object in a smooth manner. During the HGN test, the officer will observe the eyes of a suspect as they attempt to follow a slowly moving object such as a pen or small flashlight.

The officer will look for three indicators of impairment in each eye:

If four or more clues are observed, between the person's two eyes, it's likely that the suspect has a blood alcohol concentration (BAC) of 0.08 percent or greater. Research by the National Highway Traffic Safety Administration (NHTSA) found that the HGN test will allow for the proper classification of approximately 88 percent of DUI suspects who submit to the test. The HGN test may also indicate any consumption of drugs including: seizure medications, phencyclidine, a variety of inhalants, barbiturates, and other depressants.

If the weather conditions, during the exam, include rain or wind storms, the officer's observations will be impacted. These HGN tests are often performed at night, with an insufficient level of light or strobe-like light conditions due to the passing cars. This will also affect the persons eyes and might cause nystagmus. Light conditions may also affect the judgment of the officer regarding the level of sobriety, or lack thereof for the driver.

Medical and biological factors that can impact Fresno drivers

Most people are unaware that there are multiple types of nystagmus. While only alcohol and certain brain conditions can have an impact on HGN, the ability of an officer to properly differentiate between the various types can be a challenge. It could be possible that another form of nystagmus is being displayed by the DUI suspect, but the investigating officer may be unable to recognize the difference. Additionally, an estimated 50 percent of the population has naturally occurring nystagmus.

It is important to note that medical conditions like diabetes, influenza or even ear infections have the ability to cause an individual to exhibit a type of nystagmus usually associated with alcohol impairment and intoxication. Additionally, legal substances such as nicotine, caffeine or aspirin can also lead to nystagmus in some individuals.

An experienced DUI defense attorney knows the issues related to FSTs and the inaccurate results that can result from them. If you are facing charges related to the offense DUI in the San Joaquin Valley, including Kings County, Madera County and Tulare County, do not think that your only choice is to plead guilty. Take a moment to contact Terry A. Wapner and schedule a consultation in order to discuss the facts of your case and be advised of your options.